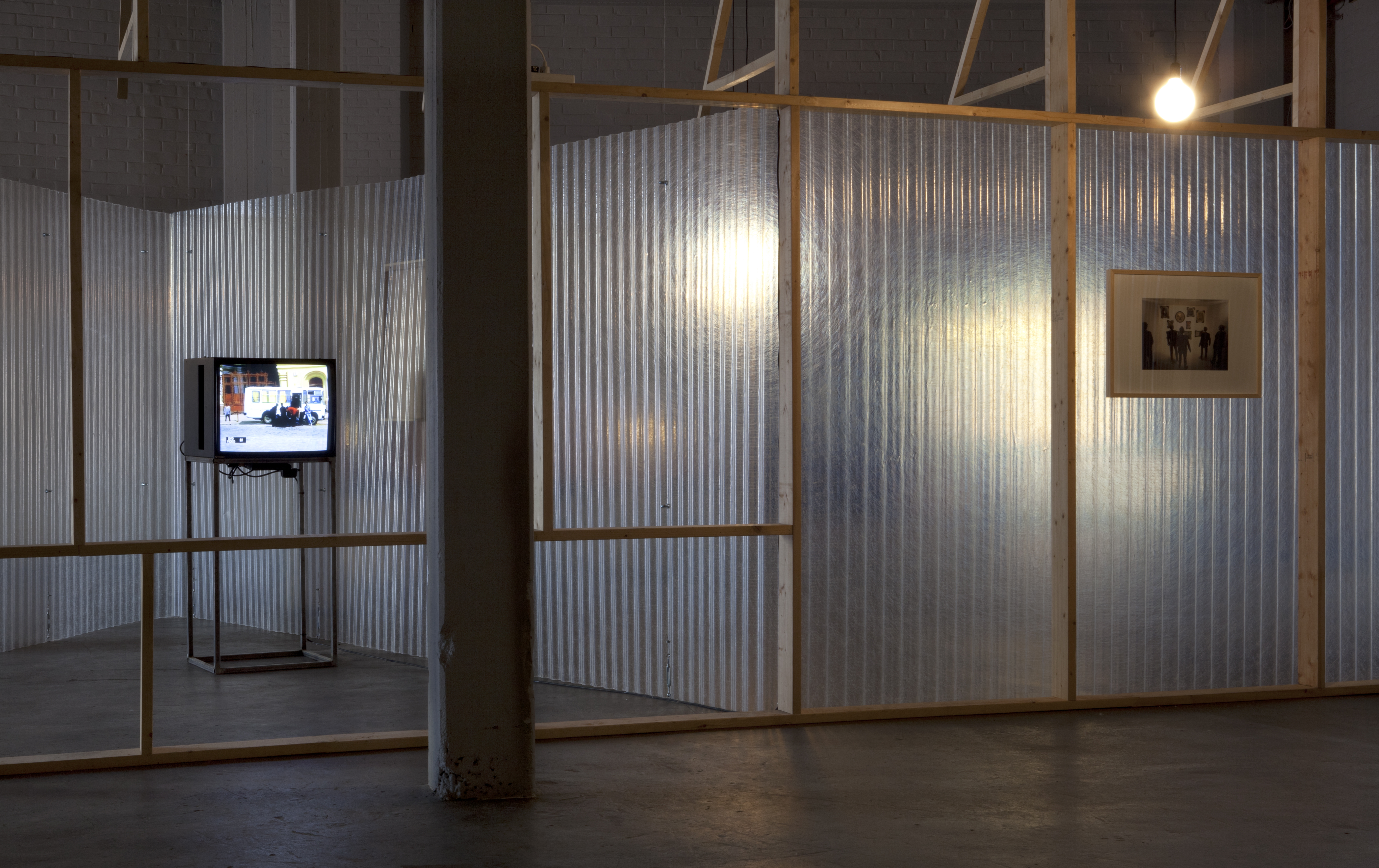 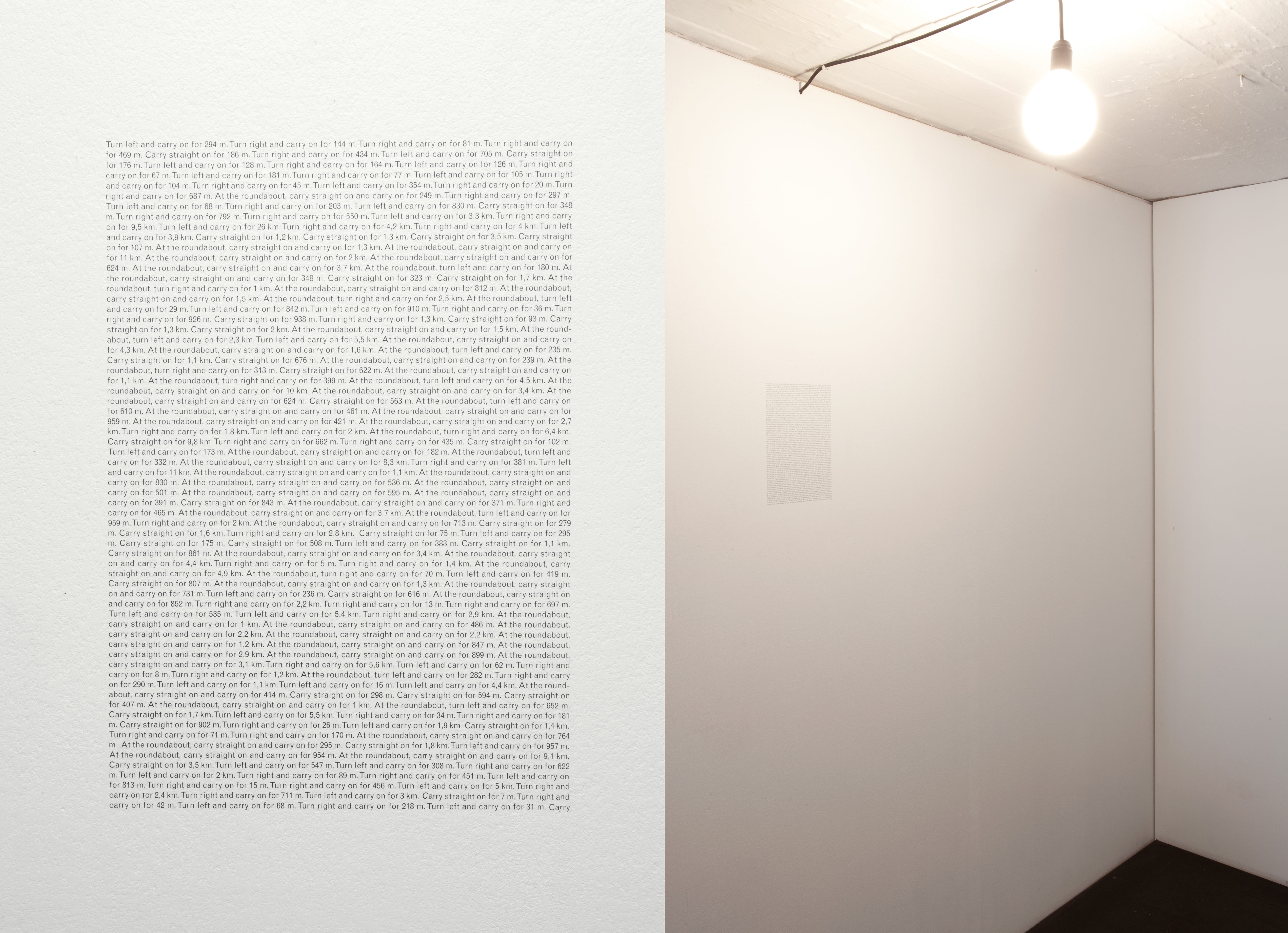 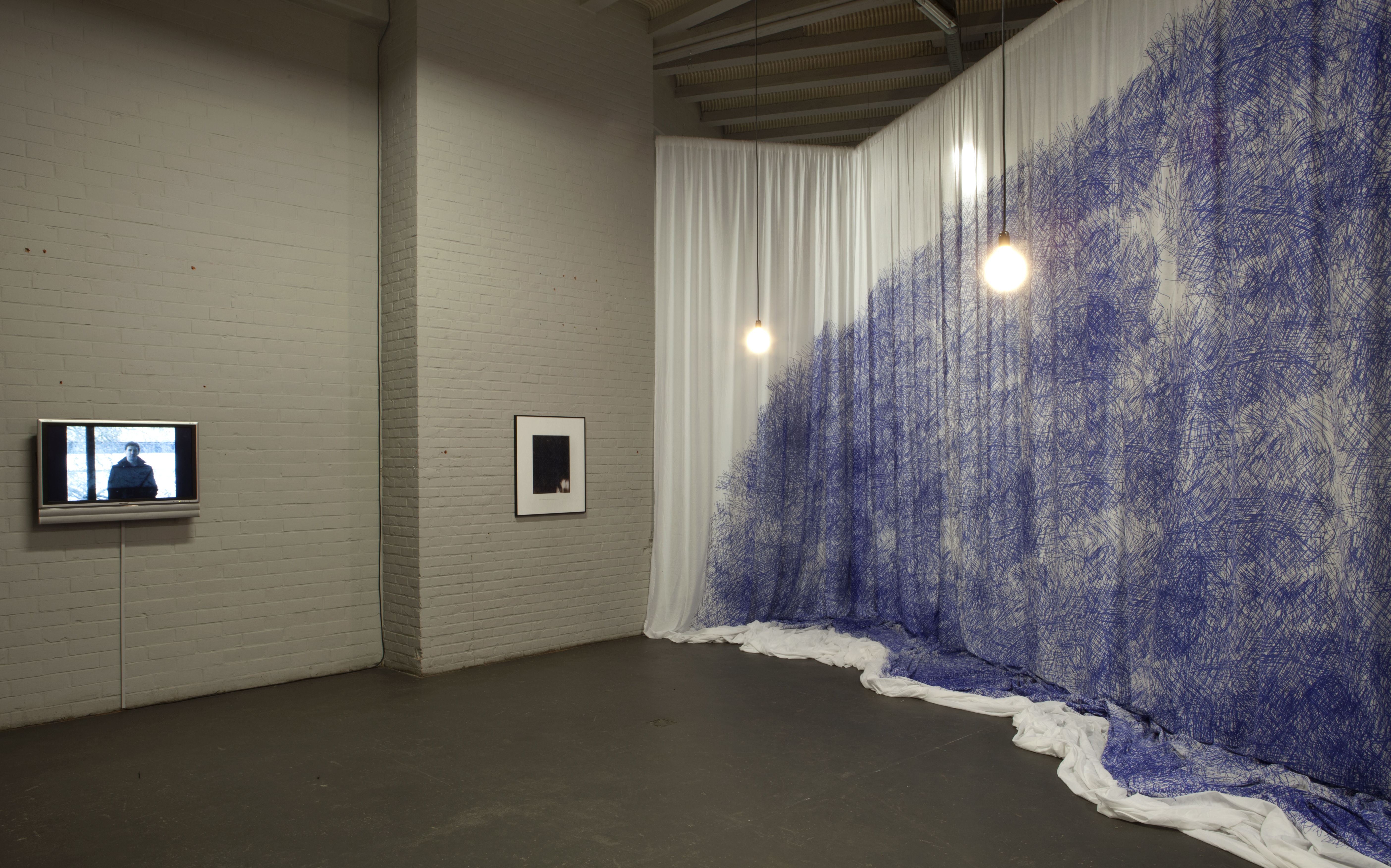 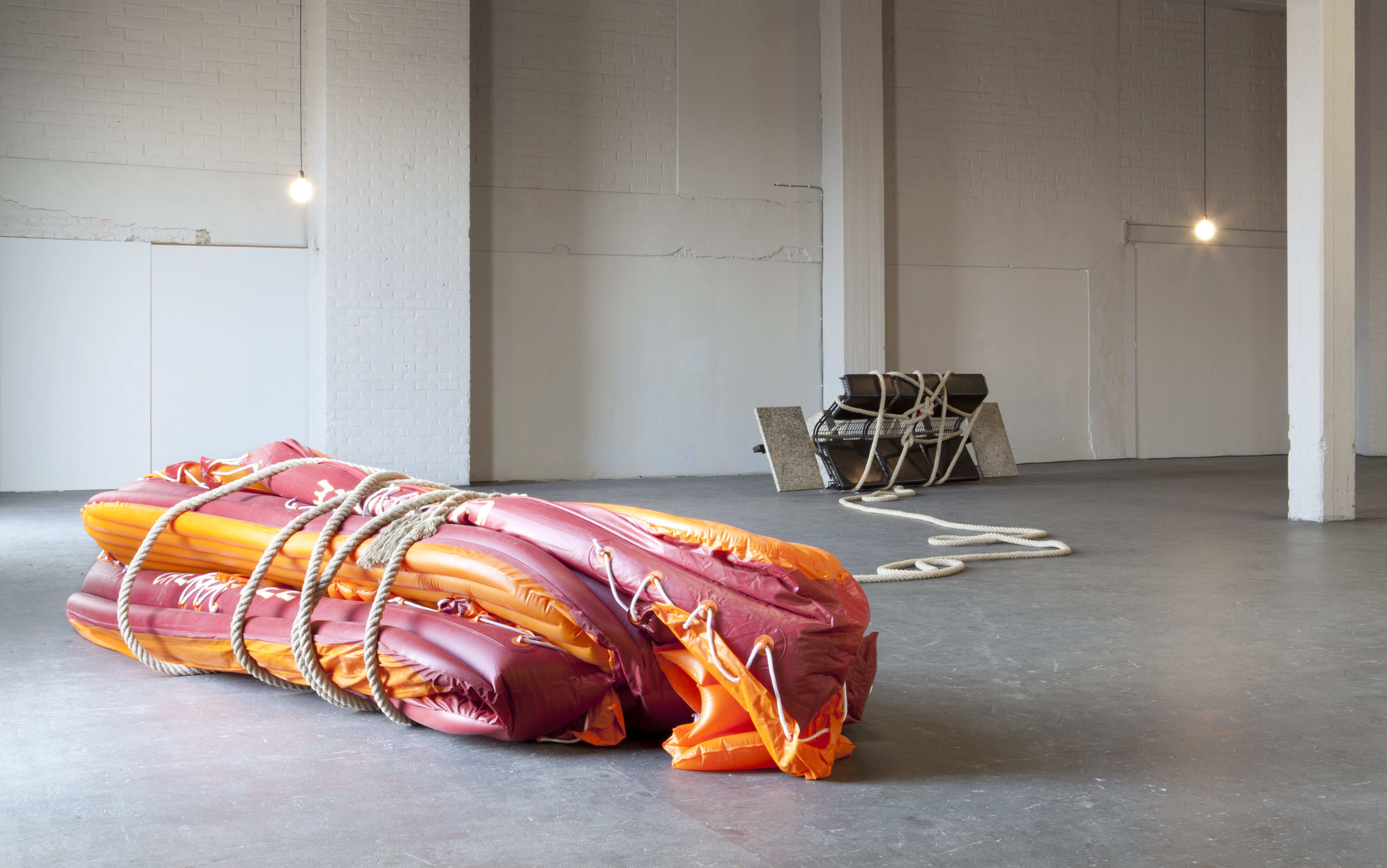 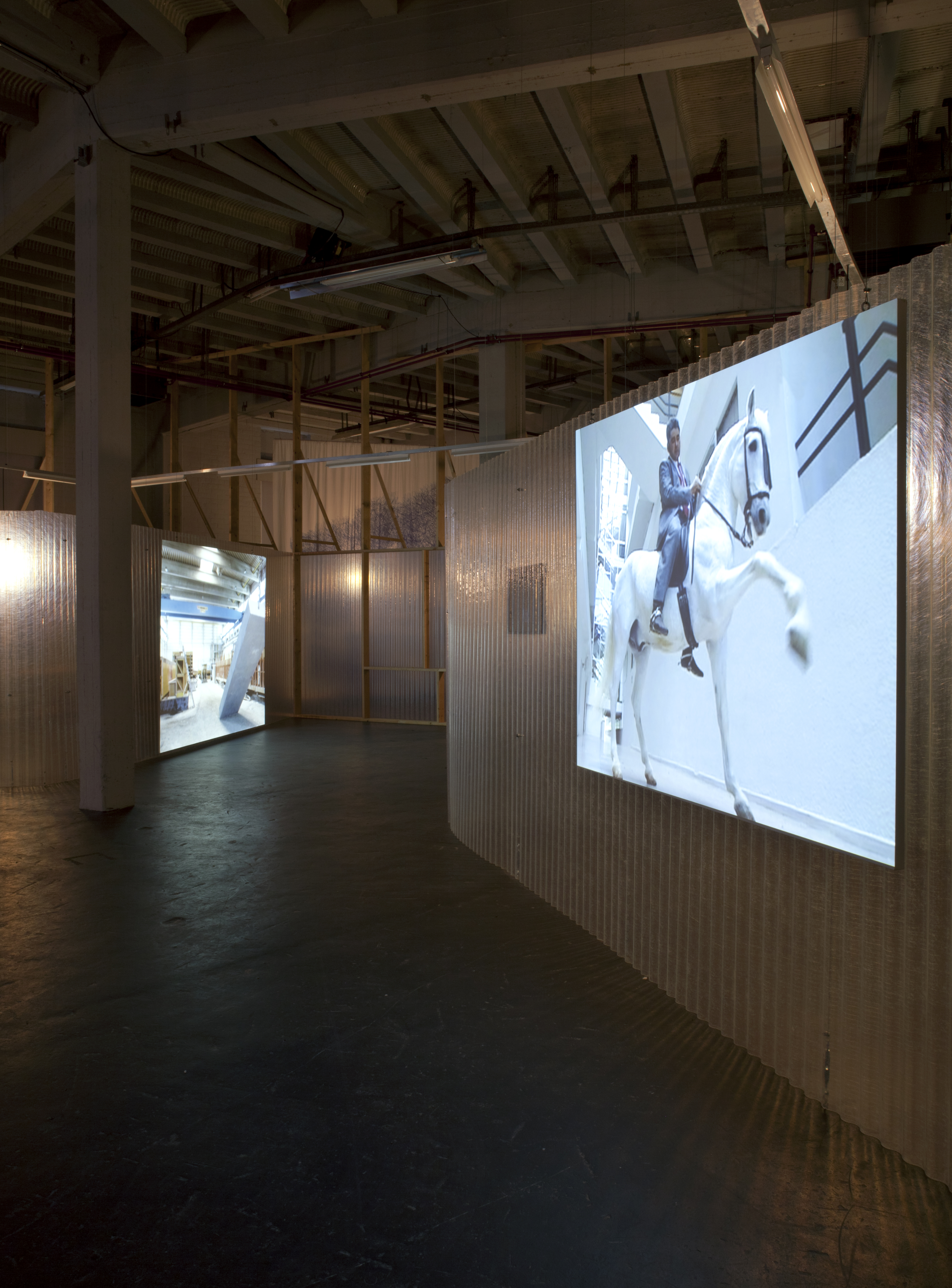 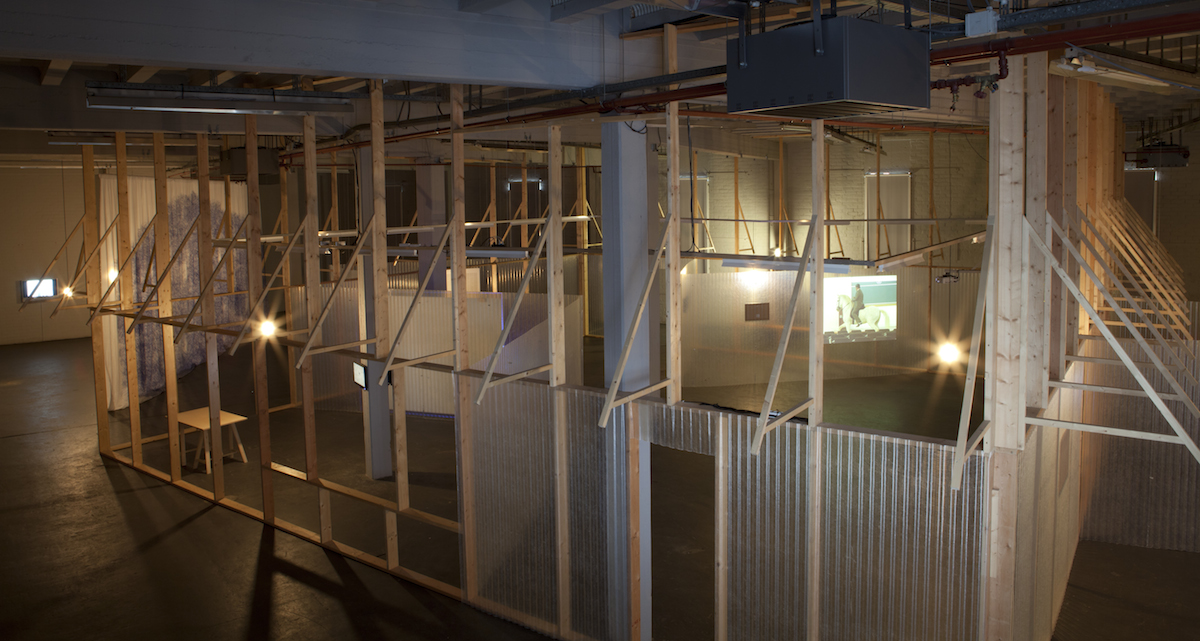 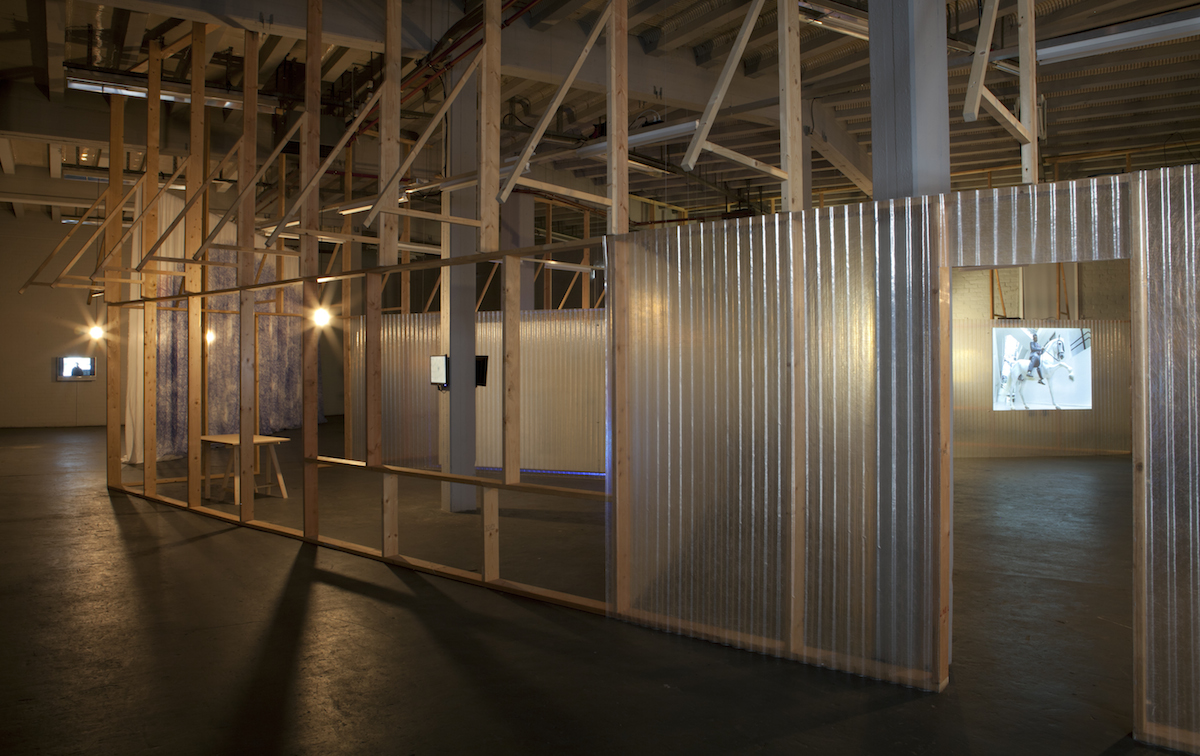 A Slowdown at the Museum

A Slowdown at the Museum is, after Museum of Speech and Museum of Display, the last of three presentations that tell the story of a fictional museum, an interplay of definitions of ‘art’ and the ‘institution’ in an accelerated scenario of rise, self-interrogation, fall, and possible rejuvenation. The presentations bring together works that make specific claims to how they want to be seen and understood and project specific notions of the institutional space that would accommodate them. These demands and positions intersect throughout the series in distinct images of the ‘museum’, in models of how art can be shown and experienced.

A Slowdown at the Museum maps a complicated, unstable historical position between past and future, art and life, with the hypothesis of a ‘strike at the museum’ as speculative trigger.

One of the central projects in the exhibition A Slowdown at the Museum, is NSK Passport Holders by the Slovenian group Irwin, which casts an intriguing look at the links and gaps between ‘art’ and ‘life’. In 1992, Irwin created the NSK (Neue Slowenische Kunst) State in Time as an infinite political entity without physical boundaries, ‘ever-inspired by the moment of grace of its becoming’, ‘manifesting itself in time yet at the same time transcending time’, and ‘mastering all its probabilities’. The initiative was a response to nationalist furor in Yugoslavia, an attempt to imagine alternatives to dire political circumstances and rethink social cohesion. The project developed by setting up temporary embassies and consulates, an NSK Folk Art Museum, peacekeeping regiments, post offices, and issuing passports for the citizens of the state; it grew at a steady pace within a relatively well-defined class of politically minded art lovers.

Yet starting in 2004, and accelerating in the following years, this pattern changed dramatically as the NSK passport website was flooded by thousands of citizenship applications from Nigeria and neighboring countries. Applicants were attempting to acquire NSK State passports in the belief that they would grant them the ability to travel to Europe, move to Slovenia or to the country of NSK. Instead of rejecting this as a parasitical outgrowth of the original project, Irwin continued to issue the passports, while engaging with the prospective citizens and advising them on the goals and uses of the State in Time – a process which culminated in Towards a Double Consciousness, an exhibition held at the Lagos Centre for Contemporary Art in 2010. However, to a significant extent, the project had been re-scripted and taken over by other actors, hijacked or hacked by motivations very different from the ones on which it had been premised. If the State in Time had initially been confined to the spectrum of political aspirations and projections of the art world, seeking to recuperate from the avant-garde a totalizing rhetoric and a transformative ambition, those aspirations were ultimately exposed to their unforeseen consequences, spilling over into different political forms in uncontrollable and ambivalent ways. If the project had initially been formulated in reaction to the ferocious nationalism in Yugoslavia in the 1990s, this turn of events situated it between two wars: one opposing actual armies, the other – diffuse but no less brutal – occurring across the North-South divide; an economic conflict, unfolding at a time when Europe is once again reconsidering border policies against a background of resurgent populism.

With NSK Passport Holders, a political art project met with an unexpected outcome which could be only partly assimilated in its own logic and translated in artistic terms. How can the work still be exhibited, how can the conventions and scales with which exhibitions operate make sense of the amplitude and complexity reached here, other than invite a deeply empathic understanding of the world? Hinged between a representational ‘inside’ – interviews, diagrams and artifacts visualizing the project – and an uncontainable ‘outside’ – the beliefs and hopes of the 15,000 citizens of the NSK State – Passport Holders supersedes the capacity of the exhibition to make full sense of its objects. In it, ‘art’ and the ‘museum’ are posed an uncomfortable, if not impossible, question.

A Slowdown at the Museum probes practices for which institutional critique, in its conventional formulation as a stage for the transfer of institutional power, is both an essential reference and an untenable premise; practices preoccupied with reversals and possible reconceptualization, whereby the tenets and strategies of institutional critique are unraveled and diverted to poetic, imaginative uses. Among other works, the presentation includes Javier Téllez’s meditation on a particular moment in art history – Dürer’s depiction of a rhinoceros he had not seen – discussed in relation to the threshold between sanity and its antonyms, and the oscillating focus of the panoptical ‘eye’ that defines them as such; Fernando Sanchez Castillo’s performative exploration of the repressive architecture of Universidad Autonoma, built in 1969 near Madrid; Lonnie van Brummelen and Siebren de Haan’s reconstruction of the Gigantomachia (at the Pergamon Museum in Berlin) from its reproductions in art history books, through which the bibliography of the sculpture institutes a spectral, boundless double for the object itself; Simon Dybbroe Møller’sThick Air, a monologue filmed in sharp zoom and circular movement through the windows of an inaccessible gallery, and his celestograph, emulating a technical process conceived by August Strindberg for the direct impression of the night sky onto photographic paper.

One way to comprehend such a collection of works – maneuvering around categories and contexts, poetically opaque or folded upon themselves – is to imagine its fictional home, or ‘museum’. We might picture the placelessness of these objects in fictional symmetry with the social dysfunction or political collapse of the very place where they could have been made sense of: catalogued, made to belong and turned into symbols of passing time. We might imagine, as a speculative trigger, a strike at the ‘museum’: a failure to administrate art, the past and the present, mirroring the opacity of the artwork. In protest to a precarious employment or an oppressive political regime, a slowdown multiplies by two the time it takes for a decision to reach its practical outcome. What effects would such a form of resistance-by-deceleration, occurring in a ‘museum’, have on our sense of historical position; which truths about art or ourselves would be withheld or remain unwritten? A delay of art-historical time, maybe a dramatic experience of temporal and existential disorientation, could be understood as both fragment and symptom of our difficulty to navigate the present.

A Slowdown at the Museum concludes a series of presentations at Extra City that staged a dialogue between ‘art’ and the ‘institution’, analyzing their reciprocal roles and functions. A generic ‘museum’ was posited as institutional regulation of our relationship to time, a tool to partition the times for the different experiences that constitute identity and political belonging. Recent art has of course done much to disturb this model, to stage turbulent events between orderly, chronological exhibits.A Slowdown at the Museum is not an inventory of those, but a composite image, a sum of traces and persistent sensations, of interruptions and moments of suspension. To return from ‘art’ to ‘life’, and maybe – misquoting Robert Filiou – to conclude that it is art which makes life more politically relevant than art, we could recall a recent, strangely germane event. Challenging the proposal to triple university tuition fees, a few hundred British students organized a sit-in at the National Gallery in London, in December 2010. What is left of the National Gallery, and what is captured in the press photographs of the incident, is a room-filling ‘abstract painting’, a pattern formed by the colored corners and reflections of the works on display, the larger parts of which are obscured by the bodies of the protestors: an ample, collaged, obscure banner for transformations to come.

'Fragments pour H. Fictional visits to the museum. Script for A Slowdown at the Museum', by Christophe Van Gerrewey